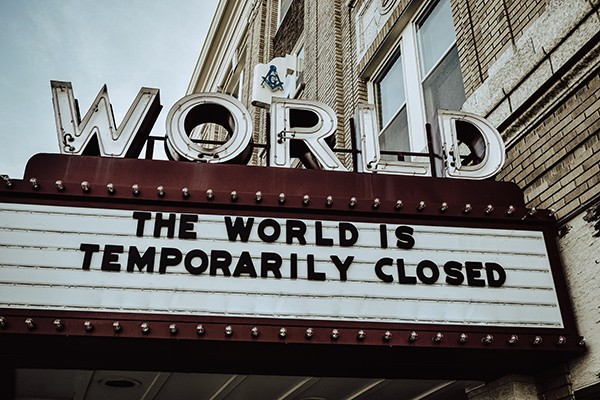 I’m Sorry But We Need to Cancel

For years in our office, cancellations were rare. They happened for a variety of reasons, but not very often. On March 9th, that all changed. That was the day that many colleges and universities began talking about or made the decision to finish the semester in the virtual world. In other words, online. Starting that afternoon and for the next 10 days to two weeks, we received a flood of emails and phone calls regrettably canceling dates that had either been contracted or were being held as strong potential events. Most of the time, the cancellation was preceded with a statement along the lines of “we hate to do this,” or “we can’t possibly imagine what you are going through but…” Clearly this was as painful for our clients as it was for us.

We were not alone in dealing with this tsunami of lost revenue. Think of any business or industry and I’m sure they have felt the sting of Covid-19. Events all over the place were postponed or canceled. Restaurants that were looking forward to warmer temperatures and their outdoor patios being opened were abruptly closed or limited to takeout and delivery only. Cruises were canceled, flights grounded, K-12 schools closed some for weeks or months, recently in Washington state for the rest of the year. With all of those businesses closing many vendors received cancellations as well. Restaurants that normally order hundreds, if not thousands, of pounds of meat, fish, dairy and produce either cancelled or drastically reduced the amount they needed. With buildings shuttered, cleaning supplies and paper products were no longer needed. People working from home don’t need clean uniforms delivered weekly or monthly, and they don’t need to dry clean the jeans and sweatpants they are wearing. Along with all of this, people have lost jobs, been furloughed, or had wages slashed. Suffice it to say the economic devastation has been far reaching.

There is a right way and a wrong way to do everything. At least that was what my mom always taught me. She was a firm believer in treating people as you would want to be treated. During this pandemic, many clients have asked what our policy on cancellations is. Our response is simple, the same as it has always been. If a client needs to cancel, then we cancel the date. On occasion, because of the date or an outside performer being involved, there is a charge or makeup date later but that is discussed before the contracts are issued. Thought you all might find the three contracting stories interesting.

Contract 1: An individual, that I have known for years and worked with at a previous institution, booked a virtual date after the pandemic began. They sent us the copy of their contract and all was good. Several days ago, they reached out to say that they needed to cancel since the institution had put a freeze on all spending. They made it clear that they were unhappy about doing it but that the decision was made above their heads and there was no negotiation. There was disappointment and frustration in the short email. Of course, I responded saying I understood and not to worry about it. We understood that things are changing daily, if not hourly, and that we would welcome the opportunity to work with them in the future. Honestly, I felt badly for them. They had been put in a terrible situation by their school.

The moral of this story is we understand when things come down from up high and will be happy to work with you or the institution in the future.

Contract 2: About a month before the pandemic started, a school contracted a date with us for the middle of April. When things went sideways, I contacted them letting them know that I was aware of the school going to online classes for the rest of the semester and assumed they were canceling. Several weeks later this is the response we received:

“Had not confirmed this with Ken but did not fill out contract because of COVID-19. Although I’m sure you assumed since colleges and schools are closed, we will not be having this event. Just wanted to follow up as I was going through emails and realized I hadn’t officially confirmed cancellation. No contracts were filled out anyway.”

There is no problem with the first part of the message, it is that last sentence that really rankled me. Perhaps I read it wrong and am taking something from the email that wasn’t there. Clearly, you booked the date, clearly, if things had gone according to plan (i.e. no pandemic) you would have expected us to show up, but you feel no obligation because nothing was signed. Do you know how many times we have shown up to events with no signed contract? It happens more than you think and 99.9% of the time there is no problem. Does that mean the next time I work with you, unless I have a FULLY executed contract, you will not expect to see me? If you know me or know FUN Enterprises that doesn’t work for us. We have many clients that, for whatever reason, cannot or will not sign a contract and we still show up.

The moral of this story is we value honor and honesty in our clients. We take most people at their word and try to extend them courtesy whenever possible. In the future, with this individual, I should insist on that fully signed piece of paper, but of course I won’t.

Contract 3: This has nothing to do with FUN Enterprises. Someone that I know had a wedding planned for this spring. Many of their guests were flying in for the big event so they had booked a block of rooms for the weekend. Several weeks ago, the happy couple contacted the hotel (part of a major international chain) to see what their options were. They were informed that since the shelter in place order had not yet been extended to their date and unless they postponed to a future date, they were on the hook for a significant percentage of the room block. Who does that? My response would have been to put pressure on them to refund the deposits and cancel the contract but that did not happen.

We can all agree that, at some point, this will end. When it is all said and done, some businesses will have increased their client base because of how they performed during all of this. Others will lose business and clients because of how they treated people during this incredibly difficult situation. One of the nice things about this situation is that FUN Enterprises has not had to change their policies or the way that they conduct themselves due to this pandemic. Some believe our cancellation policy is too lenient. Honestly, I think it is just right.

Ken Abrahams has been in the business world, in one capacity or another, for 40 plus years. He has learned lessons from some amazing business people as well as some horrible ones. The way that you treat others is the most important thing in business and in life.

Photo by Edwin Hooper on Unsplash